Note: Evan's blog is back.. no wait it is gone again, no it is back again, or is it gone again? Any how check here. You just gotta love the guy;-)
As the "Crypt Keeper" for Evan Hone's Blog(google, "Evan Hone Blog" and you will know what I am talking about) I thought I should put up this memorial for those of you who would like to pay your respects to an irreverent ultrarunning blog gone before it's time. 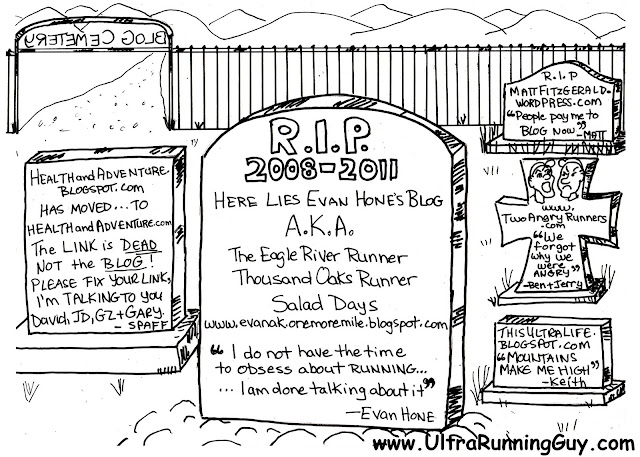 I know that some of you are wondering why Evan deleted his blog and quit blogging a few weeks ago so I took it upon myself to ask him and Evan was kind enough to answer a few questions(he texted the answers while in a meeting at work).


EJ- When and why did you start blogging?
Evan- I started the blog back in 2008.  I was living in a 1 bedroom cabin in the Chugach State Park 100 yards from the Crow Pass trailhead.  Beside Geoff there was zero representation in the mountain running world coming from Alaska.  I thought it would be fun to write about my absurd adventures in the "last Frontier".  I thought it would be a local thing but I started getting quite a bit of traffic from the lower 48.
EJ- Under what names did your blog appear chronologically and was there a reason for the name changes?
Evan- In the beginning I was the Eagle River Runner.  I am from Eagle River and my parents still live there.  It is a town 10 miles north of Anchorage. I then moved to California and changed the blog name several times after that.  Every title ended up being worse than the last.
EJ- What was your favorite post?
Evan- Every post was terrible.  HA!  I did have some good ones about my adventures in the wilderness with my dog Ernie.  I also had a lot of fun making fun of people that wear short shorts, arm sleeves, heartrate monitors, and GPS watches.
EJ- What post still makes you cringe?
Evan- A couple of shoe reviews I did.  The 2 kinds of blogs I hate are when people write about their weekly mileage and when they do gear reviews.  I am not a gear guy and do not keep a record of how much I run so I am never interested in that crap and can't believe I wrote about it occasionally.
EJ- Was blogging satisfying and worth your time?
Evan- Nope.
EJ- Did you take it personally if there were few or no comments for a post?
Evan -I always wondered about why some posts that I thought were boring would generate a ton of comments and some that I thought were fantastic generated little interest.
EJ- Did you check your stats often?
Evan- Nope.  I did not even realize there was a way to check the stats for the first couple of years.  My boss gets pissed about how little I know about computers.
EJ- Why did you stop blogging?
Evan- I have a couple of kids (had a little girl in August) and a full time career.  I do not have time to obsess about running like I used to.
EJ- Why the avatar of the large guy?
Evan- A lot of people take this stuff way too seriously.  I thought that picture was hilarious.  A glam shot of me wearing short shorts would have been too cheesy.  HA!
EJ- Do you miss blogging?
Evan- Nope.  I like being away from it.  Occasionally I hack into my wife's facebook account and I see how consumed people become with running.  It is literally all they talk about.  I do not want to be one of those people that lets running consume their lives.  Running is a major part of who I am but once I am healthy I am done talking about it and plan on just putting in the time to get better.
EJ- Do you think you will blog again?
Evan- I doubt it.  There are already too many blogs out there.  Also now that I live in California there just isn't as many cool things to write about. People down here think it is epic when they run in the rain or in a little bit of snow.  Thousand Oaks has some good mountain running but it is not Alaska.  I have yet to be charged by a large brown bear down here.
EJ- What was the worst/best thing that you got from blogging?
Evan- It is very time consuming but I did like to look back on past posts to remember some of the fun times had on the trails.
EJ- How is your hip?
Evan- Terrible.  I am now having surgery on my right hip (labrum FAI) very soon.  Same thing I had on my left hip.   I have been running injured since August of 2009.  I would give anything to be healthy again and be able to run solid mileage.  My last race I ran was Leona Divide 50 last April and my training for the 2 months leading up to it was maybe 50 miles per week because I had to take so much time off because of hip problems.
EJ- What kind of training are you doing these days?
Evan- My training is hit or miss because of my hips.  I view myself as a mountain runner and not an ultrarunner.  It is all about climbing and I only like to do races that have a lot of climbs.  As long as my quads are always sore I am a happy man.
EJ- Are you doing your 100-ups daily?
Evan- Not sure what this means?  Push-ups?
EJ- What do you think of people who do google searches for you?
Evan- Not sure.   There are a lot better, more interesting runners out there.
EJ- Have you ever google searched another runner/s and why?
Evan- Sure.  I like to google friends and read publications that talk about them.  I also keep a close eye on the Alaskan running scene.
EJ- Any "Final Words" you would like to add about blogging, Bloggers, Blogs or ultrarunning?
Evan- I spent a couple of hours volunteering/hanging out at the Santa Monica 50k yesterday.  I was so jealous of the runners out there.  I really just want to get healthy.

Evan, Thank-you so much for answering my questions and all the best with your upcoming surgery.
EJ


There were many reasons why I was disappointed when I read Chris McDougall's claims about the "100-UP" routine in the NY Times. I won't go into all of the reasons why however the one that disappointed me the most was that deep down inside I wanted to believe everything he was saying about it, that is was the, "foolproof method to relearn what the Tarahumara never forgot. A one best way to the one best way".

I cannot deny the giddy excited feelings I had in my belly as I read about how W.G. George invented the routine and then became a champion runner. It was the same feeling I had had a few years ago when I first read Matt Fitzgerald's, "Brain Training for Runners", Dr. Romanov's, "Pose Method of Running" and Chris', "Born To Run". Each book initially held the promise of being the one magic piece that my running puzzle was missing but in the end turned out to be just another addition to a still incomplete picture.

So in the end I was more disappointed in myself for wanting to believe in the "100-Up" then I was in Chris for offering it to me as "the one magic piece" that I thought I had given up searching for.

-If you’re baking a cake, the “secret” ingredient that’s crucial to success is whichever one you’re missing.

And once you’ve added that ingredient, adding twice as much doesn’t make it twice as good.
Alex Hutchinson,
Sweat Science
Posted by Eliza Ralph-Murphy at 9:31 PM No comments: